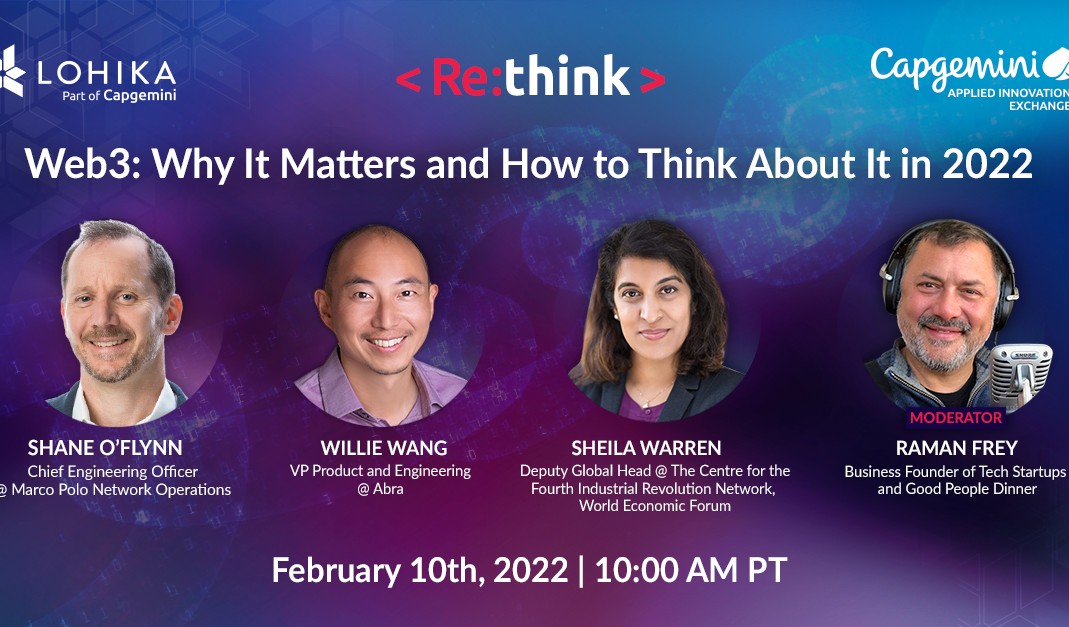 To kick things off, Raman asked the panel to provide their definition of web3.

Sheila Warren said that web3 is a decentralized online ecosystem. “Some call it the next phase of the Internet,” said Sheila. “Web 2.0 is the Internet we know today, dominated by a small number of platforms. It’s the way we engage with each other as a society,” continued Sheila.

Sheila noted that in Web 2.0, the centralized platforms serve as an intermediary. They have access to all of your data and dictate the user experience (i.e., algorithmic social feeds determine which posts you see). In web3, that centralization goes away and you have a peer-to-peer system. There’s no longer a gatekeeper that determines what we see. According to Sheila, “Web3 is a pure reform of online engagement.”

Patrick White thinks of web3 as the programmability of money. “Take the best engineers in the world and give them an API for money that never existed before,” said Patrick. “They’ll build things you never imagined, from payment networks to decentralized finance (DeFi). This will disintermediate traditional financial services companies in lending, trading and borrowing,” continued Patrick.

According to Shane O’Flynn, web 1.0 was about connecting servers, web 2.0 was about communicating through social networks and web3 is about collaboration. Each phase builds upon the technologies of the prior phase. To Shane, web3 facilitates deeper interactions between individuals.

Willie used cryptocurrency to illustrate the democratization of control that web3 provides. He said that when you trade crypto assets, the transactions happen peer-to-peer, without a centralized shut-off switch. Prior to web3, there was always an intermediary (e.g., a bank) in the middle.

Since there were software engineers and engineering leaders in the audience, Raman asked the panel how to get started building software for web3.

Patrick recommended that developers start with the Ethereum Virtual Machine (EVM). Ethereum was designed to be programmable and extensible and most smart contracts today are based on it. Learn the Solidity programming language, said Patrick.

According to its website, “Solidity is an object-oriented, high-level language for implementing smart contracts. Smart contracts are programs which govern the behaviour of accounts within the Ethereum state.” Next, Patrick said to download Truffle, a software suite for building decentralized applications (dapps).

Sheila said that the foundational premise of web3 is the democratization of access and the distribution of power and control. Today, you need a certain level of technical knowledge to use web3 and that can be a barrier to some. Sheila noted that the web3 ecosystem is working to address this challenge and make it easier to onboard new users.

As an example of democratizing access, Sheila mentioned Filecoin. Think of Filecoin like Dropbox, Box and Google Drive, but decentralized and open to all. Filecoin describes itself as “an open-source cloud storage marketplace, protocol, and incentive layer.”

Sheila notes that users can provide their excess storage capacity to the network and be rewarded in tokens. She said this model is powerful because the financial incentives are embedded in the activity itself. By allocating a portion of their storage, users can gain passive income.

Willie noted that while democratized access is good, there are potential dangers with web3. In other words, “with great power comes great responsibility.” Willie said that when you put power in people’s hands, they need to take personal responsibility. Users have to learn and be educated. They need to understand that they can be hacked and lose the contents of their crypto wallets. This danger isn’t something that regulation alone can solve, said Willie.

What’s the deal with NFTs?

It seems that everyone is talking about NFTs these days. Our audience was no exception, as they submitted a lot of questions about NFTs.

To explain the interest in NFTs, Patrick used the example of the fashion brand Supreme. On a visit to Tokyo, Patrick noticed a line of people that stretched around the block. When he asked, Patrick was told that they were in line to buy sweatshirts from Supreme that cost over $300.

Supreme clothing is available in limited quantities and yet high in demand. Wearing clothing from Supreme tells people that you’re part of the “in-crowd.” NFTs are similar. The Bored Ape Yacht Club is a limited collection of NFTs. Each ape is a hand-drawn character and doubles as membership to an exclusive club. People pay hundreds of thousands of dollars for a single Bored Ape.

Recently on “The Tonight Show With Jimmy Fallon,” Paris Hilton and Jimmy Fallon discussed the Bored Apes they purchased. Patrick compared the Bored Ape Yacht Club (BAYC) with an older NFT collection, CryptoPunks. BAYC is seeing a lot of hype and momentum because of the rights granted to owners of the token.

While CryptoPunks retained all the rights, the BAYC NFT grants legal ownership, with full rights to market and license the ape. Patrick noted that video games and music groups are being created based on Bored Apes. BAYC owners will benefit from a portion of the associated income.

Sheila noted that NFTs create scarcity around things that were previously not scarce. If you’re an owner of luxury goods, you understand this concept, said Sheila. If you don’t believe in luxury goods, then you probably don’t get all the NFT hype.

Shane added that proof of ownership and transfer of value helps explain why NFTs are sought after. For example, Shane has a Picasso print, but it doesn’t carry much value. If he owned the original Picasso, however, and had a certificate of ownership, then that’s worth far more.

When asked about exciting web3 use cases, Sheila mentioned play-to-earn models, such as Axie Infinity, an NFT-based video game. Players of Axie Infinity earn tokens that can be used to purchase items in the game and be exchanged for fiat currency. This provides a new avenue of income for people. Previously, people in Southeast Asia might leave home to earn more money.

The money they earned would then be sent home to support their families. Sheila said that there’s an emotional tax in this arrangement – it’s stressful for people to be away from their families. With the play-to-earn model, you don’t have to leave home to earn money. While some think of gaming as having fun, Sheila noted that others can make a living off it.

According to Patrick, “Web3 is a large social experiment in incentive models.” Patrick noted that while FarmVille was mostly about clicking on cows, games like Axie Infinity are more intentional in rewarding users for their attention.