The Advantages of Building a Tech Startup in Miami 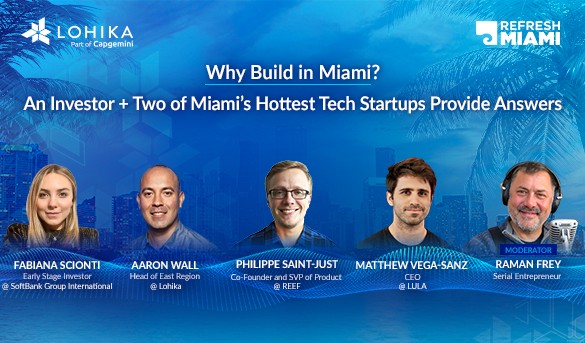 We hosted a panel discussion on Zoom. The panel:

In this post, I summarize some of the key points made by the panel.

Advantages of building a tech startup in Miami

SoftBank is committed to tech startups in Miami. In January 2021, SoftBank committed to investing $100 million in companies based in Miami or planning to relocate there. They met that commitment and then some. According to an article at Refresh Miami, “Since early this year, SoftBank has blown past $100 million. SoftBank has now invested more than $250 million to date, just nine months after the original commitment.”

During the panel discussion, SoftBank’s Fabiana Scionti noted that Miami has an entrepreneurial culture, with dynamic and progressive leadership (i.e., in local government). What’s needed, said Fabiana, is capital and focused attention. “SoftBank is focused on building with founders in Miami to provide them the capital to fuel their growth. We believe Miami is a startup itself, but now there’s the ability to be a part of something new,” said Fabiana.

Lula’s Matthew Vega-Sanz said that Miami is a great place for a growth-stage tech company to be headquartered. Companies like Uber have offices in Miami in order to be close to the Latin American market. Investors (like SoftBank) are placing bets on Miami companies, which helps raise the city’s visibility. According to Matthew, “I don’t think there’s a better place for a growth-stage company to be than Miami.”

REEF Technology’s Philippe Saint-Just recalls pitching his company to investors in 2013. Silicon Valley venture capitalists would only consider investing if Philippe moved his company to the Bay Area. Back then, most founders did move to Silicon Valley, since the concentration of talent and money there was so high. With the emergence of Miami and other tech hubs, this isn’t the case anymore, says Philippe. “Miami is now a serious contender for where the future of tech is going to happen,” he said. Philippe can now recruit employees from outside the area — and when he asks them to relocate to Miami, they say yes.

Fabiana noted that the development of tech talent is a long-term proposition, an initiative that must build over time. According to Fabiana, “The way to sustain momentum is investing in things that last. For Miami to remain relevant for the next 40-50 years, we have to build for the future. Construct the physical, social and policy infrastructure that creates the context for a global magnet city.”

In June 2021, SoftBank launched the SoftBank Operator School in partnership with Florida International University, Miami Dade College and the University of Miami.

In a Refresh Miami article, SoftBank Group International CEO Marcelo Claure said, “Our vision is for the SoftBank Operator School to become a training ground for the next generation of talent to become leaders in the most successful technology startups in South Florida and Latin America. We know these regions have talent. Now it’s time they get the training.”

Matthew stressed the importance of fostering and nurturing tech talent in the younger generation. He commends the initiatives of Mayor Suarez’s office to have modern programming languages taught at local universities. When Matthew attended high school, very few students talked about software development.

When he visited his high school recently, students were talking about developing in React and Ruby on Rails. Matthew wants to see a tech community develop by having more seasoned professionals pass knowledge down to students and entry-level professionals. That’s the only way a community can grow, said Matthew.

Partnering with and investing in Miami

Philippe is a believer in partnering with and investing in Miami. REEF Technology worked with the Miami city government to pass legislation that drives innovation in urban real estate. The legislation has been invaluable to the growth of the company.

REEF partnered with the city to launch a neighborhood career initiative, with a commitment to hire 1,000 employees in Miami. According to a Refresh Miami article, “REEF will do the hiring over the next 3 years for roles spanning nearly every division within the company, including R&D and business operations, and across specialties such as engineering, real estate, business development, culinary operations and fulfillment.”

While much of the discussion centered around growing teams in Miami, there may be scenarios in which a team of agile and remote engineers can help. According to Aaron Wall, companies often come to Lohika based on a referral (i.e., from an existing Lohika client).

Most clients have grown beyond early-stage startup and are looking to quickly scale. Lohika can help these companies scale with agile engineering teams that ship and commit code in the first weeks of the engagement. Our clients find Lohika teams to be an effective extension of their own engineering teams.