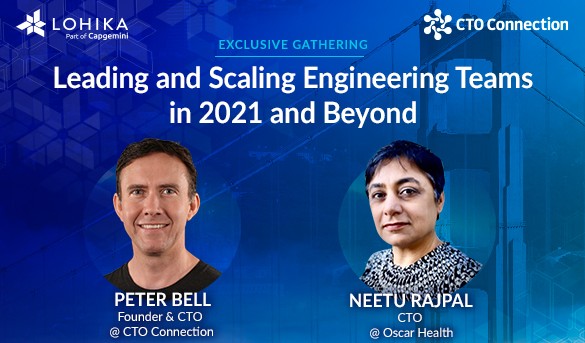 Recently we co-hosted an exclusive gathering with CTO Connection and Neetu was our special guest. The online talk was titled “Leading and Scaling Engineering Teams in 2021 and Beyond.” It was moderated by Peter Bell, CTO and Founder of CTO Connection.

A new job at the start of the pandemic

Oscar Health is a health insurance company built around a full-stack technology platform. The company, headquartered in New York City, has a mission to make a healthier life accessible and affordable for all.

Neetu joined the company in March 2020, with an intention to work in the office five days a week. She worked in the office for nine days before the office shut down due to the pandemic. Neetu made a mission-driven decision to join a healthcare company.

As the pandemic unfolded, Oscar Health’s focus was on its members: helping them find physicians, as well as Covid testing sites. Working for a healthcare company in the midst of a global pandemic — while helping members — made Neetu realize that she made the right career choice.

The company developed new performance ratings that removed the stigma of the “underperform” label. As Oscar Health adjusts to the “new normal,” they have a hybrid work model, with remote employees in 20+ states. While team members can remain remote permanently, some New York-based employees work from the office occasionally.

Compensation models for a distributed workforce

Peter asked Neetu how she is handling compensation across a distributed team. For example, how is an engineer in New York compensated relative to one in North Dakota? Neetu says that the company is evolving their compensation models as they go, but recently arrived at two major “zones” in the U.S.

In other words, there are two pay scales based on which zone an employee resides in. Peter took a similar approach in a past job. He took a New York-based salary grid and paid 15% below that level in the rest of the country. This made the company less competitive in New York and San Francisco, but helped them land attractive candidates in less populated areas of the U.S.

Video meetings as an equalizer

Neetu established a new rule: if a single person in a meeting is remote, then everyone must join the meeting individually (i.e., using Zoom, Google Meet, etc.). Neetu appreciates that video meetings can give everyone an equal opportunity to participate.

“There is a lot of equity that people get in a Zoom call because you can press a button and say ‘I want to say something’ and get in a queue. That didn’t exist in-person,” says Neetu.

Neetu’s team is working on turning the Oscar Health tech stack into a multi-tenant SaaS solution. To do so, she needs to scale her team while scaling technology in the midst of a company transition.