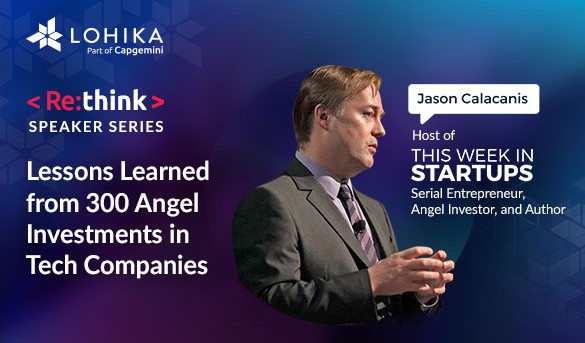 Jason primarily invests in these categories:

Jason says that these business models come with outsized outcomes. In addition, they tend to be attractive to the venture capital community (i.e., the next tier of investors once startups grow beyond their angel investments).

The subscription model in enterprise SaaS provides revenue predictability. It’s unlike selling advertising or selling iPhones, where companies need to re-sell customers and win back their business every time.

In a subscription model, says Jason, next month’s revenue will be the same as last month, plus or minus 10%. A negative 10% could stem from churn, while 10% growth could come from landing new customers or growing existing ones (e.g., a company that had 10 people on Slack could have 20 people on the service next month).

Marketplaces (e.g., Uber, Airbnb, eBay) are great businesses if you can get the flywheel going, with a viable number of consumers on one side and producers on the other. For example, the Uber business model works when drivers can consistently find passengers and when passengers can request a car and have it arrive in a reasonable amount of time.

Jason uses a simple lens to evaluate potential investments: companies that have a great product and great team that delights customers.

Why Jason invested in Uber, Robinhood, Calm and Thumbtack

Jason invested in Uber, Robinhood, Calm and Thumbtack because they have great products and great technology. He also saw strong product velocity, with each company consistently releasing new products and features. The companies have great engineering, design and product teams that have a consistent cadence of new product releases. They listen to customers and even obsess over them.

For Jason, product velocity is about the following:

If it takes 1,000 hours to build a product and three particular features won’t be used much, then eliminate the 500 hours it would take to build those features. Save those features for the 2.0 release so you can ship the product sooner.

In addition, Jason says not to waste time guessing. Instead, iterate, test and talk to users. Refine the product, then repeat this process over and over.

It’s a bit meta – Jason’s top skill for the 21st century is learning new skills. For example, software developers may gain years of experience programming in a certain language. Eventually, that language becomes obsolete and it’s time to learn a new one. We need to ramp up quickly and get to 60-70% proficiency in something new (e.g., a new programming language).

Jason says there’s no excuse not to do that. There’s so much free educational content online. On some evenings, Jason will watch lectures at MIT OpenCourseWare. We can access the same material that MIT students learn in their classrooms.

Know your customer and product

Jason says that startups don’t spend enough time talking to customers. He recommends interviewing customers about how they use your product. Use a screen recording to watch them interact with your software. Share the recording with your teams and do a debrief.

If you ask 100 startups, Jason says that about five of them consistently speak with customers like this. In addition, Jason says to do the following:

Next, Jason says it’s important to know whom you’re building your product for:

Things can go wrong when salespeople sell your product to people who don’t need it. Jason used the example of selling a pick-up truck when the customer really needs a three-row SUV. Customers tell you the pick-up truck doesn’t suit their needs and you end up customizing it to look like an SUV.

“You’re going to make custom software for people who never should have used your product,” says Jason. Instead, identify your ideal customers and optimize your product development, sales and marketing to them.

In addition, Jason says to beware of your competitors, but don’t obsess over them. Obsess over your customers instead.

View the slides Jason presented. Watch a full recording of the talk on our event landing page (registration required).