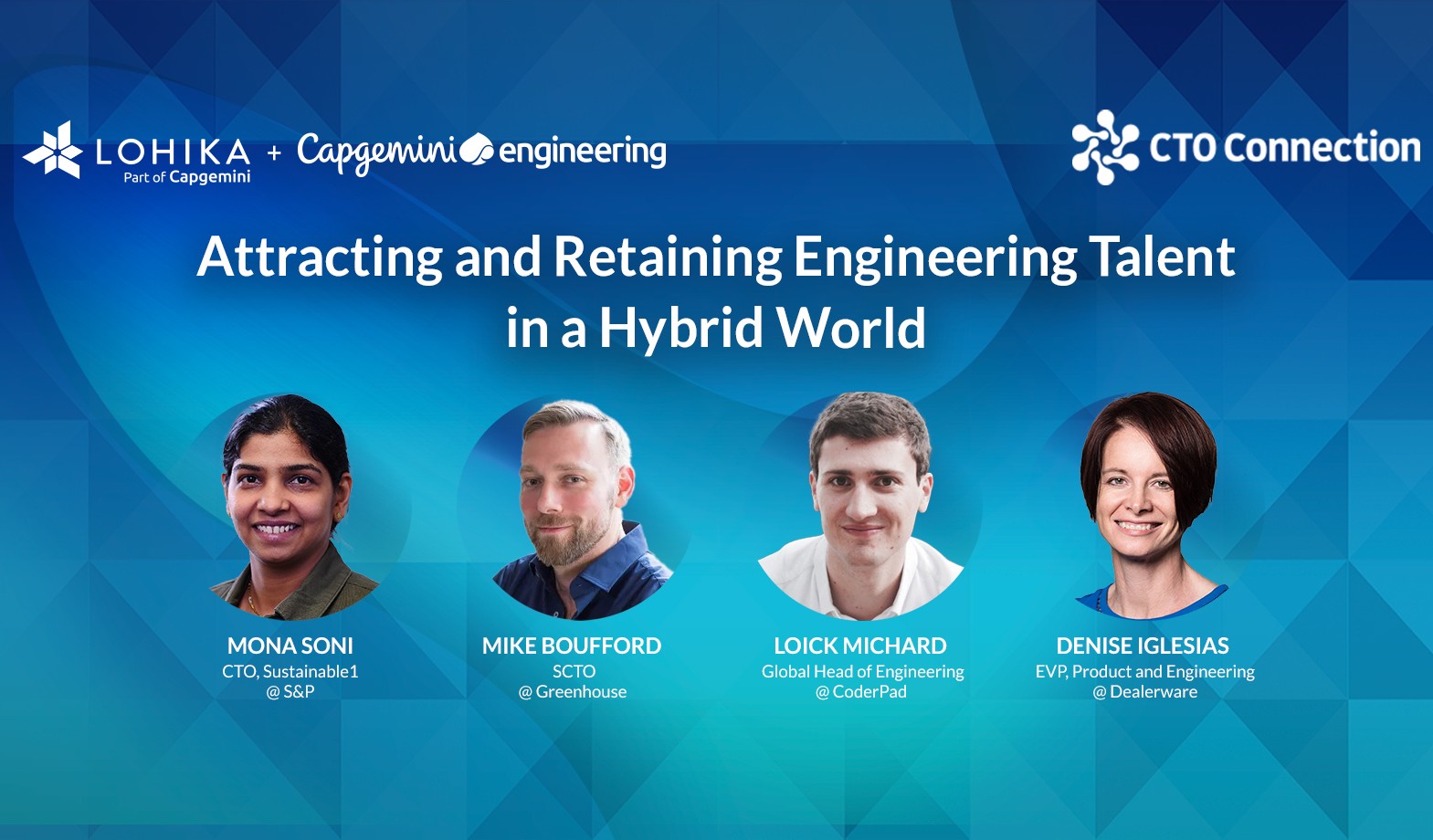 The theme of the summit was “Attracting and Retaining Engineering Talent in a Hybrid World.” In this post, I detail some of the insights shared by the speakers:

Mona Soni is CTO, Sustainable1 at S&P. She’s based in New York and leads a globally distributed team: Minneapolis, Virginia, London, Zurich, India and Pakistan. Mona often joins online meetings to check in with her global team. Rather than commute into the New York office for these meetings, Mona says it’s more practical to join these meetings from her home office.

Mona has a 90-120 minute commute (one-way) into the office, so she can save valuable hours by skipping the commute. Also, when she’s in the office, she needs to find a quiet room to hold the call, which can be challenging to secure. By working a day from home, Mona can spend more time with her family while lowering her carbon footprint.

Engineers on Mona’s team also see the benefits of working from home. When they need a “focus day” to concentrate on coding, for example, they’ll work from home. Mona says it’s important for engineering leaders to model the work arrangements they allow. For example, leaders who have a “flex policy” on working in the office should NOT go into the office every day. If they do, they’re signaling to their team that it’s important to be in the office. Instead, leaders should work from home occasionally to make their teams feel comfortable about doing the same. For meetings, Mona uses a “remote first” approach with her teams: if a single person is remote, then all meeting participants join from their desks, rather than gathering in a conference room.

Mona encourages “business as usual” (BAU) work to happen in a remote setting. She’ll occasionally call teams into the office when it’s time for collaboration to drive innovation. Mona shared the story of a popular executive who was leaving the organization. An online meeting was scheduled to say farewell and close to 1,000 people attended. Before the pandemic, there would have been an in-person celebration and maybe 100 would attend. With video meetings, the entire global team can join in on the fun.

A hybrid work model at Greenhouse

As CTO at Greenhouse, Mike Boufford leads teams in San Francisco, Denver, New York and Dublin. The engineering teams operate a hybrid model of in-person and remote. Like Mona, Mike has a “remote first” meeting policy (i.e., if one person is remote, everyone joins the meeting individually).

Greenhouse uses the Zoom plugin for Slack, making it easy to launch a video meeting directly in Slack. Mike says that intra team communication is fine, but more focus and attention is needed to keep communication happening across teams.

For a distributed organization, Mike is highly focused on the engineering onboarding experience. Greenhouse created an onboarding committee to oversee and evaluate the onboarding process. They create a wealth of onboarding content, then use survey touchpoints to understand how the process is working and what they can do better.

When coordinating in-person social gatherings, Mike says that some things are important to keep in mind. First, team members may not be comfortable returning to in-person get-togethers. They may be immunocompromised or have immunocompromised family members at home. If they prefer not to attend the social gathering, it’s completely fine. Second, some team members don’t drink alcohol, so don’t make the gathering exclusive to it (e.g., wine tasting, beer tasting, etc.).

For compensation in this distributed world, Mike is no longer adjusting comp based on cost of living (e.g., New York or San Francisco vs. the Midwest). Instead, the focus is on cost of labor (i.e., candidates’ skill levels and abilities). If candidates in Iowa can command a salary comparable to the New York market, you pay the prevailing rate, because that’s the cost of labor for that particular skill set.

Loick Michard is Global Head of Engineering at CoderPad. The engineering team is split evenly between the U.S. and France. The French team will soon be returning to the office in a flexible arrangement: team members can go into the office as they choose, with most going 2-3 times per week.

There’s an 8-9 hour difference between the U.S. (Pacific time zone) and France. The French team keeps a 5-7pm window open for meetings, as that’s 8-10am PT. There are also team members in Hawaii (2 hours behind PT) and synchronous communication between France and Hawaii is more challenging.

Due to these time zone differences, Loick and his teams optimized for asynchronous communications, minimizing “back and forth” question/answer flow as much as possible. They created processes and documentation. The documentation is intended to be as comprehensive as possible, so that questions are answered before they arise. One example is the team’s use of Notion: Documentation detailing a new feature request is quite detailed:

The teams have even used Notion to replace brainstorming meetings. The brainstorming proceeds asynchronously: engineers submit ideas, while colleagues offer up comments. The owner of an idea can then summarize all input and get further input from the team.

Here’s what Loick says about the process:

“Very often it’s even better than having a real-life conversation. Because there is no one that can speak louder than the other. Everyone has a place to gather these ideas.”

For getting the teams together in person, Loick encourages leaders to coordinate off-sites as often as they can. On a distributed team, most of our communication is in writing. Loick says that understanding the tone and intent of words can be tricky without being face-to-face to observe body language.

After spending time in-person, however, relationships change. People are freer to engage with others and they “assume the best” based on the experience they had in-person. According to Loick, meeting in-person “is like unlocking the ability to read a person’s words as if they’re right in front of you.” He recommends an all-company off-site once a year and an off-site for individual teams 1-2 times per year.

Watch a recording of the panel discussion: